Cleburne started life as a crossroads with the east/west road once connecting the forts of Graham and Belknap and the north/south road being not far from the famous Chisholm Trail.

It was a mustering pointing for troops joining the Confederacy and was first know as Camp Henderson. Cleburne became a permanent settlement and after the Civil War was chosen to be the Johnson County seat of government (after Wardville and Buchanan failed to meet the state criterion of being centrally located. The town was renamed for Patrick R. Cleburne, a Confederate General and became Johnson County's third county seat. Although the 1870 census counted less than 700 residents, in the next 20 years it had grown to 4,000 residents.

The Gulf, Colorado and Santa Fe Railroad arrived in 1881, joining Cleburne with Temple and in 1887 a second line connected to Weatherford. With the construction of a roundhouse and machine shops for the Santa Fe Railroad in the 1890s, Cleburne's status rose to new heights. It later served as a stop on the Fort Worth interurban.

A railroad worker's strike in 1922 forced the governor to call in Texas Rangers to keep order in the city which was then home to nearly 13,000 people. 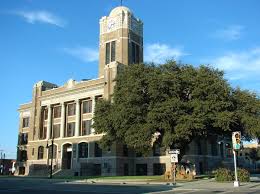