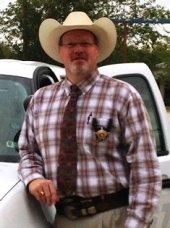 Constable Matt Wylie lives in Rio Vista, Texas. He comes from a Law enforcement family, where his father and mother were both Ft. Worth Police Officers. Matt’ s father retired from the Johnson County Sheriff’s Office in 2008 and his mother retired from The Federal Aviation Administration in 2012.Matt has one brother who is a Sergeant with the Texas Department of Public Safety. Matt has been married to his wife, Becky (Bachhofer) for 25 years and they have two daughters, (Skyler Jones & Haley Wylie). Matt has one grandson (Derek Jones) and two granddaughters (Oaklyn Jones who passed way in 2016 and Haizlyn Jones born in August of 2018)

During his law enforcement career Matt Wylie has earned his Master Peace Officer’s License, Instructor Certification, along with numerous other specialized certifications. Matt has also obtained his Civil Process Proficiency Certificate. Matt is a recipient of the distinguished FBI-LEEDA Trilogy Award.