Saturday, December 14, two ladies (Sandra Neeley & Pat Barron) from Rufus. C. Burleson Chapter United Daughters of the Confederacy presented an "Honoring our Fallen Compatriots" flag they created to Terry's Texas Rangers Sons of Conf.Veterans Camp 1937.  The flag lists all members who have passed away to date.  Charter members of the camp are marked with a gold star, all hand stitched onto the flag.

Wreaths Across America occurred all across the US at 11 am Central Time on Sat. Dec. 14, 2019.  Volunteers placed wreaths on graves of soldiers from all wars.  As each wreath was laid, the soldier's name was said aloud and they were thanked for their service.

This event was at Bethesda Cemetery near Burleson, TX - hosted by the local UDC chapter.  Color guard and musket fire were provided by the SCV. 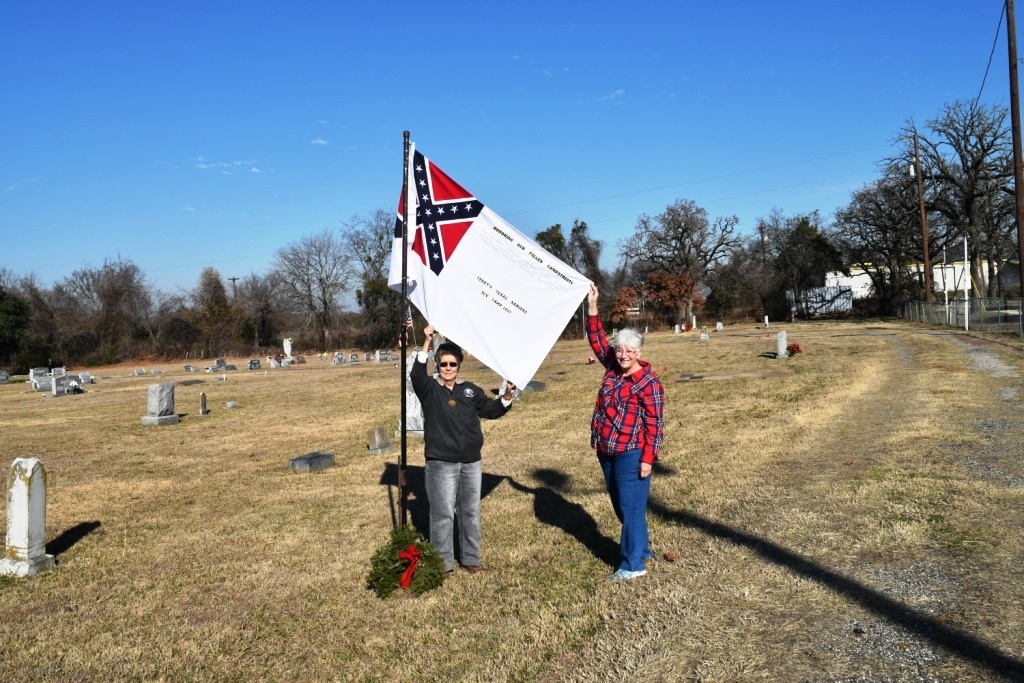 Early residents included Henry Wilkinson who came to Johnson County in 1867 and purchased 760 acres of land north of the original Grand View townsite. He donated land for a town and several businesses opened, eventually including a gin, sorghum mill, blacksmith shop, schools, 2 churches and a cemetery near the MKT railroad.

Originally called "Heugh" (or Hugh) in honor of a Wilkinson grandson, a post office opened there in 1888.  After the post office closed several years later, residents began calling the area "Antioch" which came from The Bible and also a town in Mississippi where the wife of an area resident once lived.  Today, only the cemetery remains.

Some of the family names of those interred at Antioch Rest include (but are not limited to) Basham, Benton, Fowler, Hudson, Looney, Odom, Rigby, Stone, Stricklin and West.  The Wilkinson Family Cemetery is located nearby and has a Texas Historical Marker.

Zebedee Meeks Stricklin and wife Annie Lee (Benton) lived in the area. They and other family members are buried in Antioch Rest.  The Stricklin's son Alton (1908-1986) was born at Antioch and later served for many years as piano player for Bob Wills and His Texas Playboys.  After  Wills' death the musicians called themselves "The Original Texas Playboys".  They won many music awards and Al Stricklin is in the Country Music Hall of Fame.  This famous son of Antioch is buried in Rose Hill Cemetery at Cleburne, Texas.

Antioch Rest Cemetery is under the supervision of the Grandview Cemetery Association for perpetual care and maintenance.

Rev. Simeon Odom and family moved from Mississippi to Texas in 1845 eventually settling approximately 5 miles east of Grandview in January 1851.  Rev. Odom erected a house and small log school used also as a church.  He is said to have preached the first Methodist sermon in Johnson County, Texas.

Rev. Odom later donated land for a church and cemetery and did the same for nearby Auburn.  He served on Johnson County's first Grand Jury which met under a mesquite tree as no building was available.

In 1864 during the War Between the States, Rev. Odom left for Louisiana intending to visit his wounded son.  Simeon Odom made it only as far as Nacogdoches County where he became ill, died and is buried there.

Find A Grave lists 201 memorials inside Odom Cemetery with several others nearby across the road on private land.  Surnames of larger families buried there include Bennett, Bean, Edwards, Ellis, Foster, Kiker, Kirkland, Laird, Ledbetter, Odom, Roden, Terry, and Thacker.

Odom's 2 most interesting stones likely depict the same event - the hanging of 28-year-old Robert Tucker from Missouri.  3 newspapers date the event around Sept. 11, 1860 "in the presence and with the approval of 300 delegates of Vigilance Committees" from Johnson and 6 surrounding counties.  Stories refer to Tucker as a "notorious horse thief" and state that he not only confessed but also "implied many citizens of fair reputation".  One stone at Odom states he was "hung…about 1/2 mile due east of here in a big oak tree."

More recent burials at Odom include Leonard "Jay" Beal III (1944-2010) and his father Leonard Jackson "Big Bear" Beal, Jr. (1923-2012) both of Native American descent, military veterans and appointees to the Johnson County Historical Commission.  The Big Bear Native American Museum west of Cleburne is named for the elder Beal and houses much of his collection of artifacts.

Odom Cemetery is under the supervision of the Grandview Cemetery Association for perpetual care and maintenance.